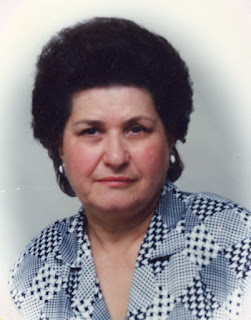 MOTHER: Panagiota (nee Karandouni) Chontos was born Pikerni, Arkadias and married to Konstantinos Chontos in app. 1920’s. Her mother’s name was Sotira and her father’s name was George Karandounis. Panagiota gave birth to at least ten children five of which survived (Nikolaos, Thanasis, Georgis, Euthimia and Katerina). She was left to care for the five children after the death of her husband in app. 1925 from an unknown disease. She followed three of her children (Geogios, Katerina and Euthimia) to Canada where she assisted in the upbringing of her grandchildren. She returned to Tripolis where she died, app. 1980’s. She is most praised by her children and grandchildren for her warmth and caring.


FATHER: Konstinos Chontos (Spagieto) born to Thanasis and Gianoula Chotou. He had his own horses and wagon which he used to transport people’s goods. He purchased the family home in Sechi (Karaiskaki rd.35) in Tripolis, with the dowry he received from his marriage to his wife Panagiota Karandouni. He worked hard to maintain his large family while building a small estate of land situated in “Raches” or “Gardonia” in the Municipality of Tripoli, which was later endowed to his daughters as dowry.


There is very little I can remember about my grandfather Thanasis Chontos except in that he limped and was very ill and hardly much about my grandmother Gianoula Chonto. My grandfather from my mother’s side Georgi Karandounis worked in the village farms when he was young and when he was about the age of sixteen he immigrated to Chicago, USA, where he worked for a number of years. On his return he married his wife Sotira. My grandmother Sotira was good looking and managed to work as midwife and birthing assistant; having assisted in the birth of many newborns in Tripolis.


I attended grade school until grade two. By age nine I was helping till and harvest of agricultural lands around Tripolis. At about age twelve or so, I worked at the “Dasarhio” helping reforestation of the mountains around Tripolis. Later on, at about age fifteen I worked in various factories manufacturing everything from women’s stockings to dresses, etc. At about age twenty-two, I was courted by my husband Pantelis who was enlisted in the army of Arcadia. I knew him for about two months when he asked my mother for my hand in marriage. With my mother’s consent, the information was relayed to me and soon after I was married to my husband Pantelis Leousis in April of 1949. On April 22, 1950, of the following year, I gave birth to my son Elias at the Clinic of doctor Megremis; my daughter Xanthy as also born two years later on January 22, 1952. During this time my husband had involved himself in photography so I took interest in this. When my husband opened up a photo studio in Tripolis, a dispute with one of his workers, Theodora, led me to throw her out of the business and take over doing the darkroom printing of photographs. Our business was doing well and by 1953 we were able to purchase some land in the “Balambinis” area near the present-day “Parnakadiko Nosokomio”, (Arcadia Hospital) in Tripolis; and begun to construct our new home. We were very successful in the photography business and soon had a modern house with all the amenities (flushing toilet) etc. and a comfortable way of life. By the time my son entered grade-school on my sister, Katerina had immigrated to Canada and begun to invite her to join her. She had left behind her son Christos Dacres in our care which she missed. By 1956, we were convinced by my sister that the new world offered us a better way of life and so in 1957, having sold or donated most of our possessions we left for Montreal, Canada. After living with my sister for a few months we decided to purchase our own condominium at the basement floor in one of the apartment buildings in De L’epee, corner Beaumont in Park Extension area of Montreal. From there I would have to walk or take the trolley to the Royal Victoria Hospital where I worked in the formula room sterilizing formula bottles for the newly born infants. Although the work was difficult and the travel between work and home a challenge I found that I was in good help with my supervisor a Mrs. DeLomier looking after me as if I was her child. It was exceedingly difficult caring for my young children since Xanthy was too young for school (age 4-5) and she had to be babysat by a neighbor. She would have to leave the attendant’s house during the day cross the street and go to our apartment and heat up the leftover lunch I had left for her. My son, Elias, would have to travel more than 8 km by streetcar to the elementary school of Socrates, next to the St. Trinity Greek Orthodox Church at Sherbrook and St. Laurence in Montreal.


Life was extremely difficult for us and there were times that we wished we had not made this journey to Canada. In retrospect there was no real need for us to do so but our pride so us not to return back form “Ameriki” empty-handed made the three years of our original planned stay last a lifetime. My husband worked at odd jobs from construction to metalwork in factories and there were many times when he was out of work altogether. We moved almost every three years from avenue de Hotel de Ville which was our second home being near the Greek Church and the school for our children to St. Laurence and Pine Avenue. By this time my husband Pantelis had begun doing freelance photography and by 1962 he opened his first photo studio in the building at St. Laurence, corner Pine Avenue; I continued working at the Royal Victoria Hospital. By this time my sister Katerina and her husband had moved to Toronto and other places with her husband working in the restaurant business. My brother Georgi had also immigrated and he too lived close by with his wife Dina and young children Kostas and Katerina (Kathy). Through sponsorship husband’s family; three brothers Mitsos, Dimitri and Vassilis Leousis and many others who followed them, had settled in Montreal and so our community of relations grew. The children continued to attend Socrates' school. By 1963 we had purchased a building in Park Avenue and Mount Royal with my son and daughter attending Bancroft Elementary School and Baron Bing High School in the St. Urbain Area. During this very pressing period of time, the French element in Montreal under the FLQ had begun to make things extremely dangerous for English speaking immigrants to my husband considered moving us to Vancouver, B.C. which we did in 1967. Life was short-lived in BC because we were lonely for our familiar surroundings, family and friends in Montreal and in the spring of 1969 we returned to Montreal and our house on Park Ave. I soon after, got a job at the laundry room at the Jewish Hospital until my retirement in 1986. By this time we had moved to 5152 Notre Dame St., Laval, Quebec to be near our daughter who had also purchased a home on Elizabeth St., Laval.


Today, I am fortunate to have seven grandchildren and six great-grandchildren whom I love very much. The issue of my health has for a long time preoccupied my daily life but life is what it is and I take it as it comes. I am proud of my past as I am proud of the future prospects for my children, grandchildren, and all my ascendants... I KNOW THEY WILL MAKE ME PROUD!