EPISODE VIII - WILL, THE WHEELS AWAY!

EPISODE VIII - WILL, THE WHEELS AWAY!
I need to report to my readers, some recent good news regarding one of the students who attended one of my classes I substituted, last year. I had waited to report on this event, until this young person, was out of my radar and could not be identified. Her alias, for the purpose of my story, is Rhoda:

For those who have read, my the first story, “In the beginning there was,The Light,” you will recall the mention of a young girl, who was "wheeled", into my class.

[Quote from "In the beginning, there was the Light": "Mr. Leousis, goes over to this young intruder, and with a warm, soft tone, looks into her eyes, smiles and says..."]

This was Rhoda, a paraplegic young person who was born normally but was inflicted with a dreadful viral,infectious disease of Poliomyelitis. Constable Martineau had come across Rhoda when he and some other officers had visited a home for handicapped children. Rhoda's sympathetic young smile had captivated all those in attendance, especially when they were given a picture of a dress that Rhoda had dreamt of wearing, one day at her senior prom. The officers had no difficulty granting the first part of her wish, the dress but were heartbroken knowing full well; they could not fulfill the second part of her dream.

Constable Martineau, after consulting with Professor Hcif, both decided to have me help the young teen. As always, they had to be extremely careful that my involvement would not be discovered, thus placing me in any danger. They planned to initiate contact with Rhoda but have it played out over time so that no association would be made with me. This was going to be a long healing process:
During the time I am acting out, my experience on "the firing range" in Tripolis, in the first episode, “In the beginning there was the Light”, I usually go up to some student in the front row and ask them to shield their face in case the bullet I am trying to dismantle, blows up. When it explodes in my face, searing my hand, blood dripping from my ruptured eardrum, at that instance, I touch that student in front of me, asking them if they are alright. I do this for dramatic effect. And so it was last year, during the telling of my story, in one of the high schools, that I touched Rhoda.

It had been arranged, "by the powers that be," that at that day, the class teacher, would be away and that I would be replacing them; innocent enough. If you remember, while I am acting out the story, I usually ask that student in front of me to cover their eyes, pretending to shield themselves from the exploding bullet. As I make this request, I place my hand on their shoulder. During this time, without anyone taking notice, The Light begins to be awakened in them. And so it was that day at the hospital with Rhoda. I knew there and then that a healing process had been sparked in her and soon, she would be granted her second wish:

That day, after arriving home, I decided to take an afternoon nap; I began to drift into the Elysium Fields. Next to a flowing wind of thought, by the river of abundance, I could see a physical metal chariot carrying Rhoda. I called out to her: "Do not fight it. "Will the wheels, to leave you!". Upon her having set sights on me, she closed her eyes and focused on my message. A tremendous flow of thought sprang forth, tearing the wheels off Rhoda's chariot, her body shooting up towards the "Eternal Light." I knew then that Rhoda's wish had been granted, her healing process had begun. 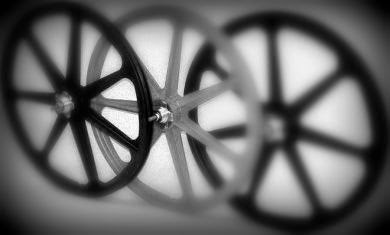 The next morning, when Rhoda woke up in her bed, she began to have some, "sensations" in her legs. She dismissed this notion at first as she had done many times after having dreamt that she could walk. When her assistant, Ms. Monica, came to help her get up from the bed and onto her wheelchair,  she again felt some sensation, as Ms. Monica guided her legs onto the footing of the chair. With a gentle chuckle in her voice, Rhoda said, "If I wasn't so embarrassed to say, I thought I felt the pressure of your hands on my legs." They both exchanged a smiling glance. The attendant assured herself in her thoughts that, there was no way, after all, these years, that Rhoda would be able to feel anything. Weeks passed, and Rhoda's sensations became more persistent. At one point, she could actually turn her legs, just slightly, from right to left and back again. She decided not to mention anything to anyone, for the time being.

The weeks turned into months, when one day, one of the ward assistants decided to drop in and check on Rhoda. What she saw floored her-literally! She witnessed Rhoda being able to bend her legs, while in bed and bring her knees up! She immediately called the doctor to come in and examine this, "miracle," she had just witnessed. Sure enough, after a simple "pinprick test," which involves poking the legs with a pin or needle, the doctor verified that Rhoda had acquired some sensations to her legs.

After some three months of persistent physiotherapy, I am now able to report that Rhoda, will be putting on her graduation gown, and will be attending her graduation dance: When asked by a recent visitor from "the security group", how this miracle had happened, Rhoda, winked at him as if she knew who he was and said, "I willed, the wheels away."

Isn't this a wonderful world? NEVER GIVE UP!

Doctors said she wouldn’t live to her first birthday. She just went to prom with two dates.