Over the past few weeks, during the summer break, a number of readers have e-mailed me, asking questions about what is the Elysian Fields. Where are they to be found, and how does one get there? These are just a small fraction of questions regarding this subject. I will try to explain this "experience" as best I can because like all experiences, it is unique to everyone's use of his or her imagination. 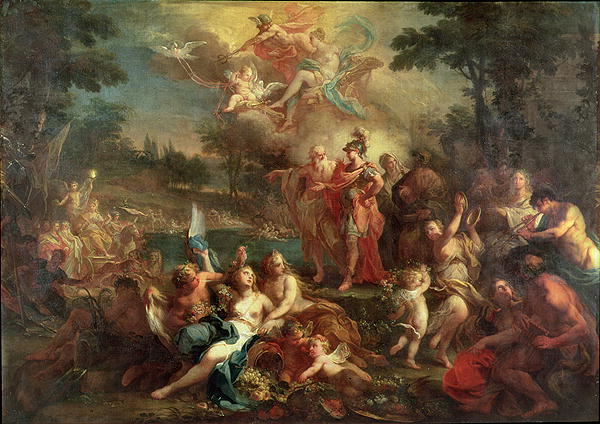 I cannot show you the path to the Elysian Fields, there is no map, nor any direction.  I can give you "a sense" of what it is like by telling you my stories that I hope will enlighten you. I will serve as one of the many "guideposts,"  which you will encounter in your life on Earth. We are here to aid you along your path to the Elysium Fields. By sharing our wisdom with you, you WILL know when you have arrived at the Elysium Fields for your just reward.

I had to substitute for some senior grades at one of the large high schools in Montreal. In one such class, in walked two identical Afro girls; one led the other because her sister was blind. My curious eyes welcomed them, and I asked the sighted one if there was anything I could do; she smiled at me and introduced herself as Amaboe and her sister's name Kcarobe. I puzzled for a moment and asked the sighted sister if her blind sister would be comfortable if I showed a video. At which point, Amaboe turned to me and said, "It's alright sir, my sister can see through my eyes." I smiled at her and said, "Your sister is fortunate to have you see "The Light."

I would like to have the reader first "view," the following video, which was shown that day, to appreciate what will follow next about my attempt to explain the ELYSIAN FIELDS. The video is titled Small Pleasures by Constantin Pilavios and can be found on YouTube.

During the showing of this video, I watched intensely how Amaboe's eyes scanned the screen like a hawk gliding the air looking for the smallest of movements on the ground below. She was the viewer; her sister Kcarobe was the receiver. With each minute scene, where the man described his sensual perception of his surrounding, i.e.,  Small pleasures, someone to cover you, dreaming, waking up to the song of birds, fresh-smelling clean sheets, etc... With each scene, a sense is heightened. One could see the stoic reader, Amaboe capturing with her eyes, every essence of the video while Kcarobe's face lit up like the firefly entering the man's sleeve. With each wonder Kcarobe's thrill increased because she knew, the answer to the riddle, long before her sighted classmates could even come close to guessing, that the man was "blind." Kcarobe, knew the answer to the puzzle that has eluded humankind from the beginning of time; they both knew the path to the Elysian Fields.

Two weeks later, I found myself in Toronto, Ontario: Some good Samaritans had offered me their place for the summer for which I am forever indebted. Each early morning, I would exercise by walking around this park, adjacent to the apartment building, in which I was staying. Most days, I would surpass an elderly lady who was pushing her roller walker: She was frail and weak but determined to push against the cement cracks on the sidewalk and have her daily outing. Each time I would walk past her at a fast pace, I would greet her, and she would share a smile with me.

As I continued on my journey, I thought what it would mean for a person to grow old and wondered about the old woman. That evening, I entered the Elysian Fields seeking answers: 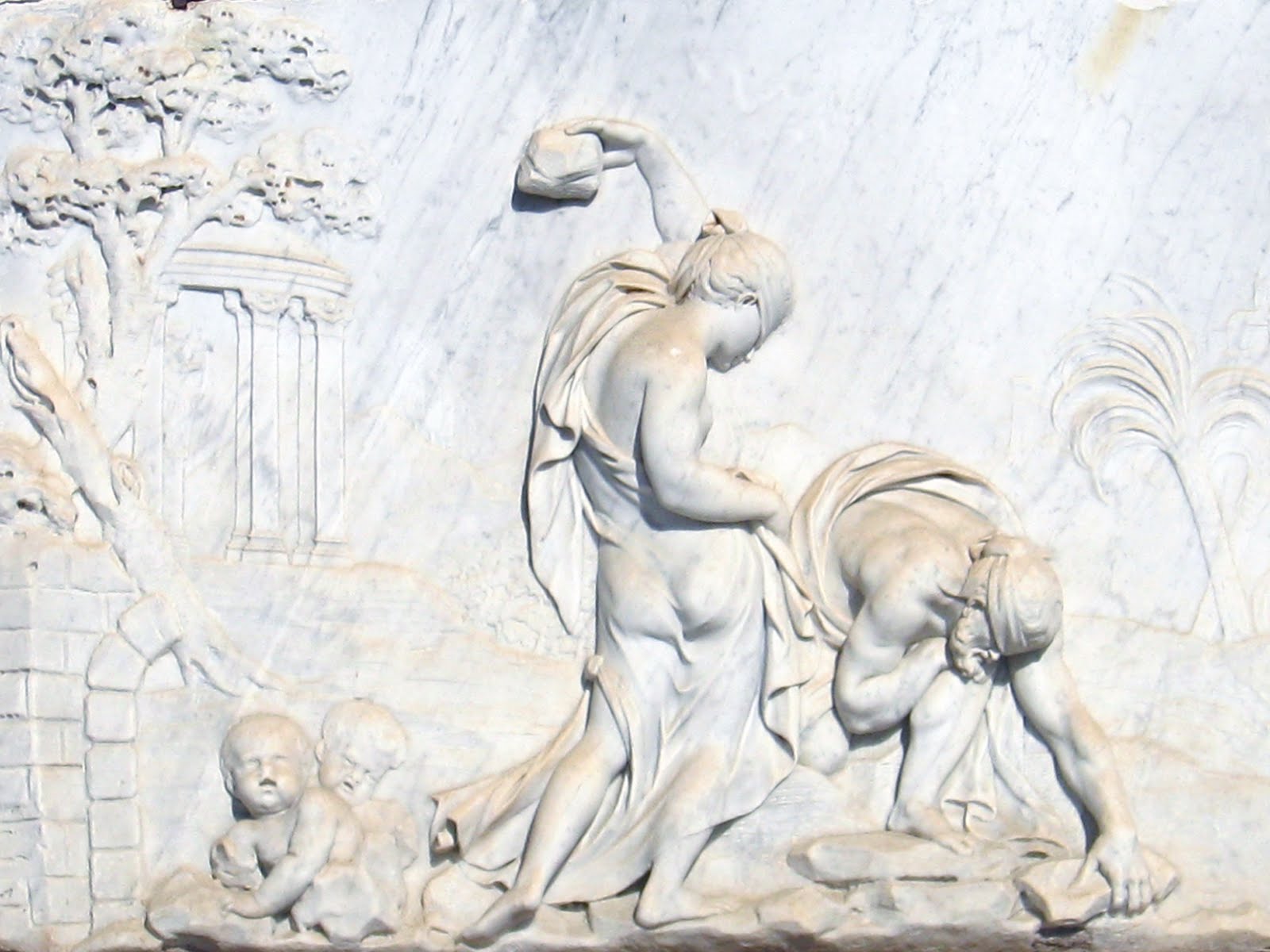 In the reflection of thought and that which is known, I gazed down a valley of sorts and as I watched, an old man and an old woman, cast stones (Petra) behind them. For each stone thrown by the old man, a young male child would come to be, in its place. Likewise, a female child would be created from the Petra (stone) thrown by the elderly woman... I puzzled at this scene and could not understand the mystery. As I approached closer, from the side of their tent, I could see the most powerful entity of all, Zeus's light shine on me. He said:

"DEUCALION and PYRRHA, have given me hope for mankind, I have cast them anew. Let all who know me realize, that should they forget who cast the stones of their creation, imagination will be no more, and no life will be worth living." I knew what to do.

The following morning, on my daily walk, I met the old woman on my way, once again. This time I stopped, touched her right shoulder to get her attention and said, "Wheels when you are young, wheels when you are old," she looked at me, smiled and responded: "Except now I have few friends to play with." We both laughed. "That is because you have given up on your imagination," I responded. "Use your imagination," I said. "I see you pushing the old ice cream cart on wheels."

"Look at all those children rushing out for your treats!" The old woman broke out in uncontrolled laughter; her heart glowed with "The Light." She now had taken control of her world and in her childlike happiness called out, "Vanilla, Chocolate, come and get it!" 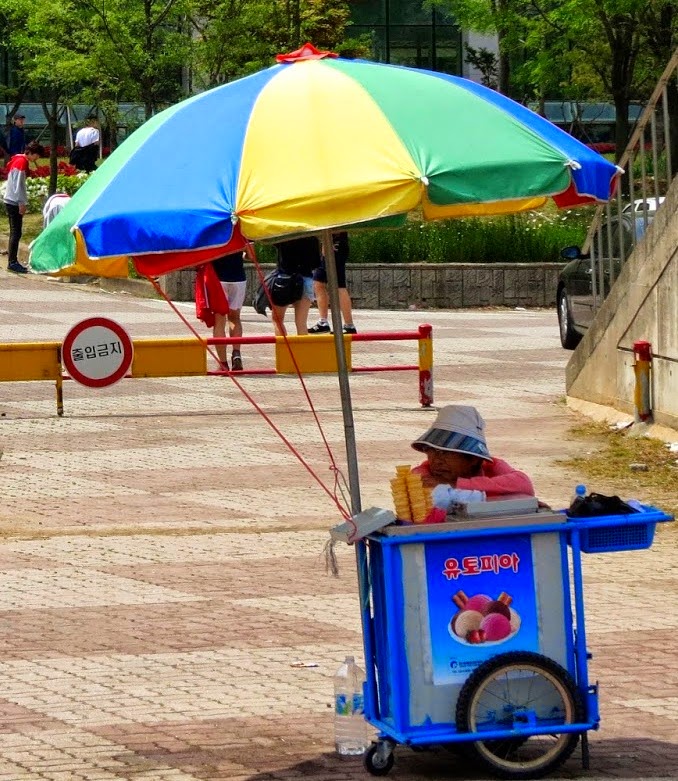 Passers-by, along the park, soon would stop and listened to our laughter as I would inform them of our discovery, and they would "play along." The ice-cream lady had arrived, and they all pretended to look into her box of goody's, pulling out this and the other treats, and using pretend money to pay for same... It was a joyous morning of open hearts, each of us for that moment, realizing what "The Light's" wisdom, had revealed to me:

The mystery of life is nothing more than little sense experiences, flavored over with a touch of imagination, from the hearts of men/woman, having been given life from "Petra"; willed by the imagination of the Gods.

The old woman was no longer lonely and alone; her friends in the park would wait each morning to meet her and use their imagination to laugh and to play, forevermore.
Therefore, my young friends, I hope you realize that what you have in your hearts is the joy of life, revealed to you through your imagination, the path to the Elysian Fields.

If you are sharing this story with your parents or grandparents, please watch the following video "Wake up", by Kostas Karydas. I am sure, they too, have the wisdom to share with you, which will guide you on your wonderful journey of life and to your final destination to the Elysian Fields.


For now, "The meaning of LIFE?

Open your mind to see the hidden layers of reality.

Love is the ink; wisdom is the message!