EPISODE XXIII - THE BUNNY, THE BEGGAR AND THE ISLAND OF SHAME

EPISODE XXIII - THE BUNNY, THE BEGGAR, AND THE ISLAND OF SHAME

My stories have begun to touch the hearts of people in the social services world. Several well-placed "caseworkers" in the CAS societies, around the country, have been writing to me how they are using my stories to reach out to young adolescents. I am exceedingly grateful and humbled that my work is being used in such a constructive way to reach out to those most precious in our lives, our youth.

I was called to a meeting to one of the Children's Aid Societies offices to meet with Mrs. Asil. We were to discuss my oral storytelling and how I may be of service to their organization. Storytelling has a powerful impact on young people:


Through sincere love, care, and attention, and the opportunity to use their imagination through storytelling, young people, slowly begin to forget their tragic past and look forward to a hopeful future. The Light within them becomes the strength and their guide. I was humbled by their gracious call to be part of this sacred help and transition to healing. 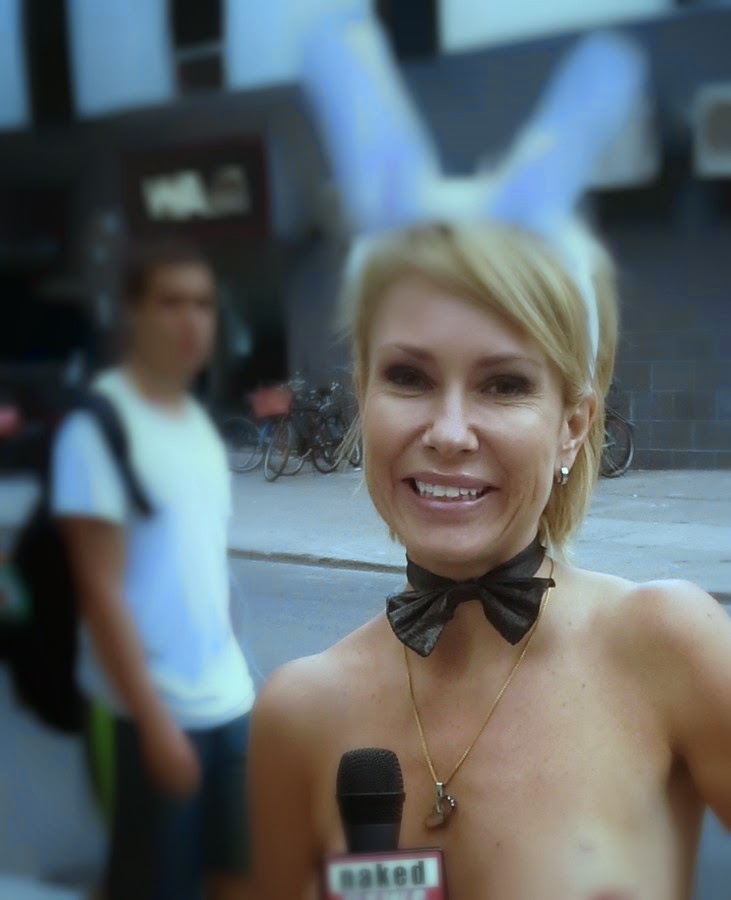 When I arrived at the corner of Gnuoy and Allebasi, I noticed a small crowd of people gathered surrounding a woman holding a microphone. She was interviewing passersby. The revelation of her garments or lack there off was "interesting" to put it mildly; she was topless!

For some reason, she spotted me in the crowd and asked me if I would mind her interviewing me; I accepted with grace, although somewhat uncomfortable at first as to what her questions would be. She asked me for my name and proceeded to inquire my point of view on how and if I knew of the Playboy magazine and its founder Hugh Hefner; it brought me back many memories of my youth.

There was a time when even the thought of seeing a woman naked in public would lead you to church confession. Having a topless woman standing at the corner of a busy intersection, only meters away from the Children's Aid Society, was in poor taste, to put it mildly.

The youthful interviewer was very polite. She allowed me to express my thoughts freely about the beauty of the human body. I noted that the human body was nothing to be ashamed off for both men and women, young and old. I went on to say that creative artist, throughout time, has used the human form as a centerpiece of creativity. Today, such "nudity," adorns world heritage museums and art galleries world over. "The Bunny," thanked me politely for my contribution and proceeded to call on others in the crowd for their points of view.

Despite my liberal thinking about such matters, my "old fashioned," indoctrination of worldview, made me uncomfortable with this setting. I proceeded to approach the Afro cameraman from the side while he was filming. I whispered in his ear, "I don't know if you are aware but just meters away, is the Children's Aid Society. You might make some people uncomfortable with your presence here. It would be wise if you were to move to another corner down the street." He turned and winked at me as to indicate that he was in agreement. When the interview was completed, he spoke to the others in his entourage, and they packed their equipment in a small van and soon drove off.

I walked over to the  CAS headquarters and met with Mrs. Asil. She impressed me by her grace and humanity; her dedication to service and the call of children. I was humbled in her presence and assured her she would have my full cooperation. That I would contribute, however I could, in helping her organization "reach out" to our youth. We agreed that it would take another meeting for us to work out the organizational details. There was to be another meeting two days later.

I decided this time, not to take my car to the downtown core, so I chose to use the public transit system, the Subway. I arrived about 45 min earlier than my scheduled meeting, so I decided to sit and enjoy the sunshine at a small park just next to CAS.

Approaching a bench that was situated right at the limits of the small Park; I noticed an elderly lady, no taller than five feet tall, sitting at one of the benches. She was positioned between two carts, enjoying what seemed to be a box of sugared donuts. Her two carts were filled with used wear, bottles and "collectibles" that reminded me so much of Andrew from my story, "EPISODE XV - THE WISDOM OF ANDREW".

As I neared her seat, I commented, "You are a very wealthy woman, with all these possessions." She paused, looked up at me, and remarked, "Are you making fun of my poverty, I could become a millionaire someday." "I am sorry," I noted, "I meant no disrespect, it's just that you remind me so much of a friend of mine, who is also a collector of sorts." I proceeded to sit next to her bench and became enthralled by her wisdom.

She was of Hungarian descent and had come to Canada when she was very young. To my surprise, she was very well-read on many subjects from economics, art, and medicine and even took an interest in my health as a diabetic to suggest several holistic cures. The more she spoke to me, the more curious I became in her predicament and how such a talented and wise individual, a signpost of wisdom, was now a homeless person on the street. I sought to investigate further.

When I met Mrs. Asil and mentioned this "Bagged Lady," she noted that she knew of her and "her story"; my jaw dropped when I heard the details. Turns out that her uncle raped our Bagged-Lady when she was young. At the time, some forty years ago, the "victim" was treated as the perpetrator by her family and cast away because of the shame she brought to them. There was no mercy.


We discussed how such youth of today wound up as teen mothers who are treated with much care and support. But none-the-less, such stigma and harm do run deep in our society. Teen Pregnancy has become an epidemic. (Please watch this video: The Teen Pregnancy Epidemic).

I walked away from the CAS center with many questions haunting my path. I again approached the Bagged-Lady, sat next to her, and queried about her life further. She bowed her head in shame when she realized that I had already learned much about her past; she did not feel comfortable with sharing. Through my sincere assurances and by explaining the work I did in the service of the young, she agreed to talk to me and began to open up. She was adamant and concerned that today in our schools' system, there is still taboos and shame placed on such life events. Most concerned, she was about young people not receiving the right education about such things and marriage; how lives are ruined. I asked her if she would allow me to tell her story. I assured her I would respect her privacy. She agreed only if I kept her story anonymous; she refused to have her picture taken.


When I returned to my apartment, I found myself struggling with many thoughts about The Bagged-Lady. It was time I entered the Elysium, for guidance: 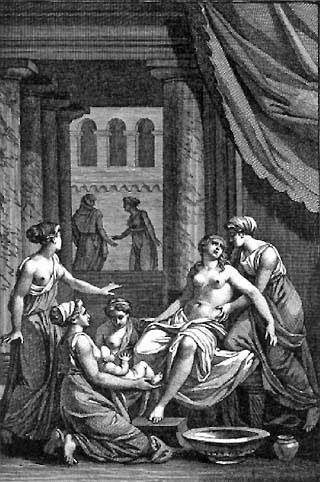 (Eileithyia will not haste birth of life, bearer of "The Light." Nor will we shame those who choose to bring it forth. But know this, that life once created, is a sacred trust to mankind from us. Those who bring it forth, bear all responsibility for its care and guidance to wisdom and the path to the Elysian Fields for their just reward - so they perish should they fail to protect.)

When I awoke, I thought about my story in EPISODE XIII - ELYSIAN FIELDS,IMAGINATION IS THE PATH, and how Zeus had repopulated the earth after the great deluge where he drowned all as in the story of Noah's ark. He salvaged hope in mankind by the hospitality and grace of Deucalion and his wife Pyrrha and cast man anew. Thus human life had now become sacred protection of the Gods, guided through their wisdom born of "The Light" within them. I realized what needed to be done.
I visited the park next to CAS, the next day and found the Bagged-Ladies' ware, her two carts standing there, like two lions guarding her gate but she was nowhere to be seen. I sat to the right on the empty space and waited. 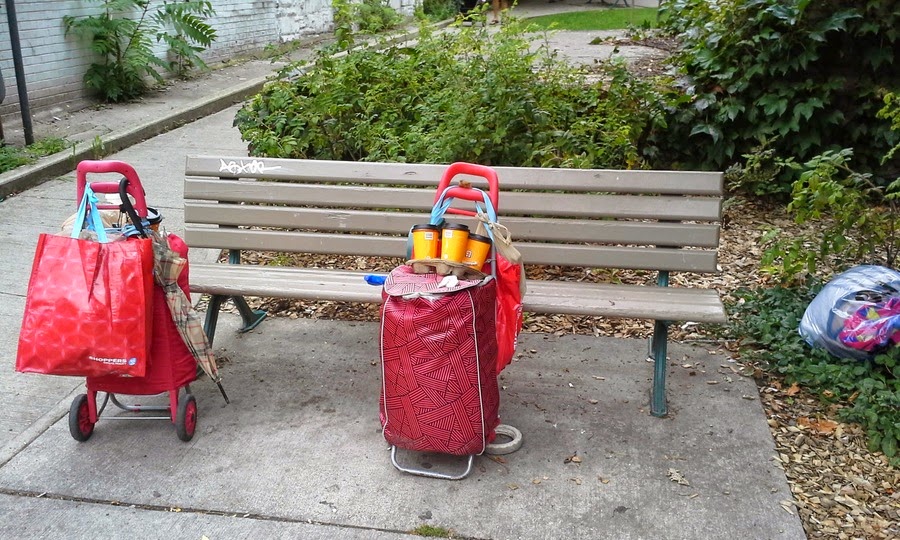 I soon became uncomfortable at the stares of passers-by and felt that somehow, I was associated with the two carriages and that I was now identified as being homeless. I began to realize how, these "stares of accusation," reminded the Bagged-Lady of her cast in society. Like the untouchables of India, once cast in this stigma of life, there was no escape; humans suffered on this "Island of Shame." I thought of life's irony; now just meters away, a "liberated Bunny," proud of her profession as a reporter, had exposed herself for all to see. I longed to see the Bagged-Lady and assure her from the Gods, that she should suffer no more in shame for she had done nothing wrong. I thought and waited.


And so it has been my young friends, that on numerous occasions, I have passed by this Island of Shame, looking for the Bagged-Lady. I have asked around for her far and wide, and I wonder. Have you seen her, do you live on such an Island? Have you been stigmatized by society, for some event in your lives, born out of your innocence? 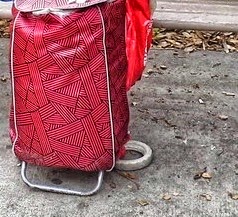 If you have, will you look down at her and be critical of her cast in life? Will you identify with her sorrow and speak to her in honoring her with human dignity, seeking her out like a signpost to the Elysian Fields? Will you tell her from "The Substitute Teacher," that her story is now helping our youth seek a safer path in their growth, without shame and much forgiveness and understanding?

( Note, it is July 4th, 2015, next to me in the library sits a wonderful person, her name is Grace. Grace just published her article,  My Struggle to Say "I Am Homeless".  I want to recognize Grace's contribution and ask that she continue to share her life experience for she is true, "Guidepost to Wisdom". )


Thank you for your participation.
1-Mediterranean bulbous herb (Urginea maritima) of the lily family —called also sea onion: The dried sliced bulb scales of a "squill" used as an expectorant, cardiac stimulant, and diuretic in medicine found mostly in Pylos.