EPISODE XXIX - WILL YOU DANSE WITH ME TO THE MUSIC OF THE ELYSIAN FIELDS?

EPISODE XXIX - Will you dance with me to the music of the Elysian Fields?
In my previous three episodes, I spoke about my experiences in the "Being a Dad" program. In this program, REAL Dads, recognizing their frailties and wanting to do the best they could for their children, enlisted to share with other Dads their experiences and support of each other. During these days, I received many compliments from parents and a few from my target audience, the young adolescence. I assume they were "listening." A fair number, who did write, inquired about the wonders of the Elysium Fields and asked that I write more describing this sacred place. I will now return to this calling:
I seem to have intrigued my audience about "The shadows of the cave", in which we base our reality. The cards we are dealt with in life's complexities, yet eventually, we attain wisdom and see the world for what it is. If we navigate the waters of life's adventures with the support of parents and caring communities, we realize our potential. With the aid of "The Light," we gain wisdom, the path to the Elysium Fields. A very familiar African proverb states, "It takes a whole village to raise a child." In my three previous episodes, I said that parents, be it single mothers with children, single fathers with children, or children without parents, all need support. It is the entire village's responsibility to give that necessary support.
During the time I was visiting where the "Being a Dad," program was held, an attendant would have to come to the door, unlock it from the inside and let us in. We would then have to wait at this common area until we were all assembled. This same attendant using a magnetic key would then initiate the elevator to take us up to the second floor for our meeting. Usually, I would arrive a few minutes earlier and would strike a conversation with this young attendant. One thing led to another and a soon, I gained his confidence for him to share with me his personal life experiences.
He first identified himself as an "Irishman." He chuckled and smiled, completing his sentence by saying, "I have never been to Ireland." Turns out that this young man had held on to this identity because he was told that his father was Irish. He was in foster care most of his life, left in the to the responsibility of the Children's Aid Society, since the age of four.  The young, Irishman, had never met his father. He was told by CAS, and some of his adopted parents, that his mother and father, had separated when he was very young. His father had left for Ireland, while his mother, unable to care for the young child alone, had to give him up to the state. As the young Irishman continued to express his life experiences, I became uncomfortable with my held perception of foster care. My curiosity intensified, and my questioning almost became intrusive; I wanted to learn so much from him.
Our young Irishman went on to describe to me a world unknown to me. A world where multiple caring men and women, played a very constructive role in this young man's life. He had a positive outlook on life and did not feel he had been given a "bad wrap" as he put it. He had been enriched by his many parents whose homes he had stayed with and the multiple brothers and sisters he had adopted along the way. Indeed, the "Entire Village" had played a vital role in his upbringing.  Today, he speaks warmly of the large family he belongs to and the brothers and sisters he can identify and the many shared experiences they all have.
For weeks in-between visits to the Being a Dad program, I eagerly looked forward to meeting this young man to learn more about his life experiences in foster care. I had mentioned to him that I write stories in which I try to assist young adolescence in overcoming issues that they face during this critical time of their growth. He was eager to learn from me and contribute in any way he could; the "sharing" was of mutual benefit.
By this time, I had become friends with Dr. Worinklein, whom I had met many moons earlier during my experiences mentioned in the "Jessica" story. In parallel now and then,  I would consult this caring child psychologist about various child issues. To my surprise, according to Dr. Worinklein, some foster care parents, he had worked with, were better suited in raising children, than their own biological parents. I was troubled by this statement and could not understand how some biological parents could have failed in their sacred care of their own children. I turned to the Elysium for guidance.

I entered this place of wonder of which human language cannot describe but perhaps a symphony of a million musical instruments may compose its harmony, the universe was speaking to me. I was invited to partake in a dance orchestrated by the rhythm of the universe, life itself. The experience made me realize what answers I sought were self-evident:
I realized that not all the wonder of the world and life itself is based on one human, mother, or father, who might sidestep the music of the dance of life. It is the collection of all those in the community, "The Village." The values by which we collectively choose to live by,  the harmony of it all, gives us a place of anchor, of who we are, and what we are all about, as a species. As long as those near us are caring, giving, and wholesome individuals who love us, it really does not matter if they are our biological parents. Eventually, we will grow and become independent of adults and parents ourselves. As we grow older still, those who were our loving parents will perish with the natural passing of time (Chronos). What remains is our memory are the good times we can associate with the past. My young "Irishman," came from such an experience, and his memories were filled with positive, healthy thoughts.
So my young friends, especially those of you who live with no biological parents but are in the care of others, stay positive about your predicament. Love "your parents," natural or not and forgive them for at times sidestepping to the music of good parenting. Remember, it is to their best interest for you to succeed in life: You have an open invitation to dance to the music of the Elysium, through the presence of "The Light" within you. Know that the Universe is unfolding, as it should and that you are a child of this universe, no less than the trees and the stars within it. You have a right to be here!
At this time in my storytelling, I want you to read, INDIRECT MESSAGES FROM THE LIGHT - A COINCIDENCE? and let your imagination soar. Some of the ways “The Light” is revealing itself in our lives. Also, too, “listen” to The Therien as it touches your Light.

The Book version is available on Amazon. The most update version can be found at ... 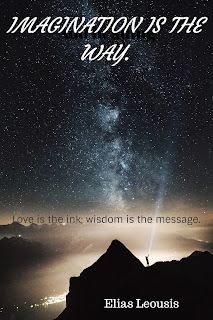